Our nine year old son looked into the forest then up at me as we hiked side by side along a gurgling brook. His dad and sister walked a few steps ahead of us. Upstream was the Glade Creek Grist Mill in West Virginia, a rustic wooden building with a pitched roof. Today its wet planks were framed by yellowing autumn trees. 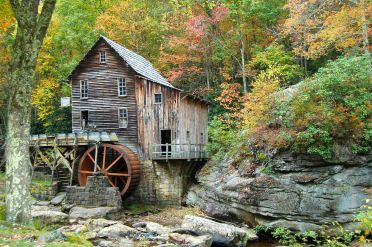 “I guess that depends on what you mean by living being,” I said. “I think of a being as — ” I tried to think of words that would be familiar to him. I failed. “As a sentient being — something that has a soul.” The path was littered in gold, red, and toast brown leaves, and I kicked at a drift with my leather hiking shoe.

“Personally, I think of trees as living beings,” I told him, “but I think a lot of people probably think of them as living things.” Our son looked up the mountain into the dripping forest.

I sucked in a big breath. “Oh boy,” I said. Up ahead, our daughter twirled a red maple leaf between her thumb and pointer finger. “Your soul, if you believe in souls, is…” I struggled to find words. “It’s the part of you that makes you you.”

“No, the spirit part. The part that is left after you die,” I said, then immediately knew what was going to come next.

“Not quite.” I searched my brain, trying to find language to describe souls to a seven and a nine year old.

“Your soul is the parts of you that aren’t physical,” my husband told them. “Your feelings, memories, friendships. The emotions you feel. Love.”

Our son tilted his head. “But isn’t all that stuff just your brain?”

I looked up to the trees again, hoping for some help. There was no wind; the trees were not talking.

“Yes, that’s one way to look at it,” I said. We like to give our kids a suite of options when it comes to spirituality and religion, to let them know that there is no hard and fast answer. No agreed upon truth that works for everyone all at the same time, and that they get to choose what they believe. “Some people believe that what Dad and I are describing as spiritual — feelings, intuition, love — is purely physical. A series of chemical reactions in our brains, nothing more.”

He kicked at leaves, thinking. I was still stuck on the soul thing. I wasn’t satisfied that we’d explained what a soul is.

“Remember when we talked about reincarnation?” I asked. The kids had asked about religion several months prior, and I told them I thought there are as many paths to God as there are people on earth. Then, in typical over-informative fashion, I gave them synopses of several religions of the world: Christianity and Judaism, Buddhism and Hinduism, Wicca, and Islam. The concepts of reincarnation and karma resonated with them more than the idea of heaven and hell did.

“Yeah.” He looked up at me. He remembered the reincarnation talk. “Like I could come back as a bug!” This excited him, the idea of coming back as a bug.

“Remember how I said that when you die some people believe you go to heaven or hell, or in the case of reincarnation, you might come back as something else – another person, or maybe a bug?” I said. “The soul is the part of you that would go from one life to the next, that would go into that bug after your body died. It’s the part that would carry everything you learned in each incarnation.”  I gestured uselessly to my heart. “The spirit part.”

My brain hurt from the effort of describing this. Soul, sentient, spirit. How do you explain these things? “But reincarnation is just one idea. Brain chemistry is another.”

“So nobody knows the real answer,” our son said. “What happens when we die, whether our feelings are just our brain or part of our soul.”

“Nope. It all depends on what you believe,” I said. “Nobody knows for sure.”

The leaves in the trees rustled a little. Not much, but enough to remind me of our son’s original question. 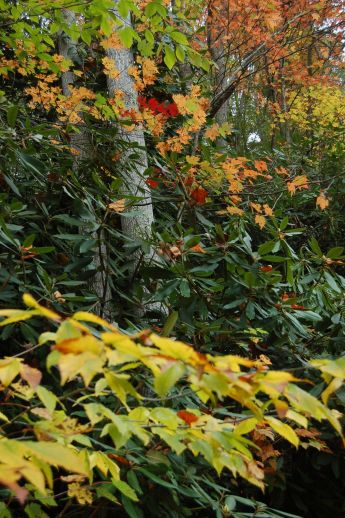 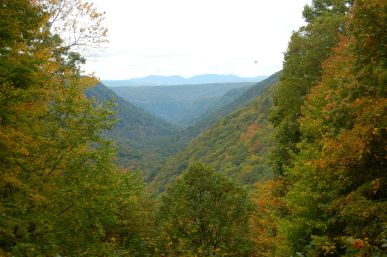 “I think mostly people think humans have souls, and maybe animals have souls, but I don’t know that a lot of people think of plants as having souls. So most people would probably call trees living things.” I looked up at the green and orange and yellow and red leaves, and the strong trunks with rough or papery or chunky bark, and I saw how all those trees were nestled together as a community on the mountainside, gathering sunlight, being beautiful. I thought about the times that I have felt one with the whispering forest, when there was no doubt in my heart, or mind, or soul that trees are part of the same absolute that I am a part of, that we are kindred.

“Do you ever feel a connection to nature?” I asked our son. “Like, in your heart, a feeling that doesn’t have words, you just feel it when you’re out in the woods or by a stream or something?” It was my last hope, in this “thing” versus “being” discussion, that he would know what I was talking about.

“Yes.” He said this without hesitation, and I knew he would get it now.

“Me too,” I said. “Sometimes when a breeze blows through and the trees sway and their leaves rustle, I feel like they are talking. I don’t know what they are saying, but they are saying something.” I looked up to the forest again. “In their tree language.” Our son giggled. “I feel connected to them somehow, like they have spirits, or souls, or whatever you want to call it.”

“So when I think of trees,” I said, “I think of them as living beings and not just living things.”

Our son’s eyes flared with understanding as he looked up at me. “Yes,” he said. His body relaxed with the contentment of a seeker who has found the answer he sought. “I think you’re exactly right, Mom.”

Yellow is autumn trees to me. Originally published October 17, 2013.

214 thoughts on “We talked to our kids about souls”