After our son’s doctor pronounced him perfect at his seven year checkup, she said, “We don’t need to see him again for a long while.  These next few are the golden years of childhood.”

She tipped her head toward our boy, “They become much more independent over the next few years – pouring their own milk, picking out their own clothes – yet, they are still innocent and childlike, and they want very much to please you and their teachers.  They ask a lot of questions, and they want to learn, and,” she smiled, “you get to see the emergence of their unique personalities.”

And you can have real conversations with them.  You can tell them, “Fix yourself an Eggo!” on Saturday morning while you sleep in.  And when your son is nine, his jokes progress from nonsensical knock-knocks to a nuanced sophistication of timing and subtlety that surprise his dad into laughter and leave you saying, “Huh?”

But most importantly, you can begin to teach them cards.

I wasn’t much of a card player growing up.  I loved gin and rummy for the first few hands, and then I’d get bored with them.  My husband played poker on and off for several years, but I never participated.  That was his man-night-out thing.  I couldn’t relate to the depth of his card love until we spent Thanksgiving with his family in Chicago a few years ago.

Over the few days we were there, amongst all his aunts and uncles and cousins, and Grandma Janet drinking appletinis, and my aunt-in-law and uncle-in-law and me making emergency brownies at ten at night when we got hungry for baked goods, there were, as soon as the first beer cap was popped, the first gin and tonic poured, the first wine bottle uncorked, at all hours of the evening and late into the night, three card tables going.  At the highest table, two steps up from the living room and four steps up from the den, Grandma Janet and rotations of three aunts and uncles played bridge.  At the other two tables, lower in elevation (and in status) the rest of us played Euchre, our drinks leaving wet rings on the card tables.  Euchre is an intricate card game for exactly four players, with trumps and bowers and tricks and strategy, and teams where communication with your teammate is prohibited, yet, unless you declare, “I’m going alone,” you are dependent on your partner to win.

In other words, an insanely fun game.  I was hooked immediately.  And now that our kids are in these golden years of childhood, it is time to train them up for Euchre. 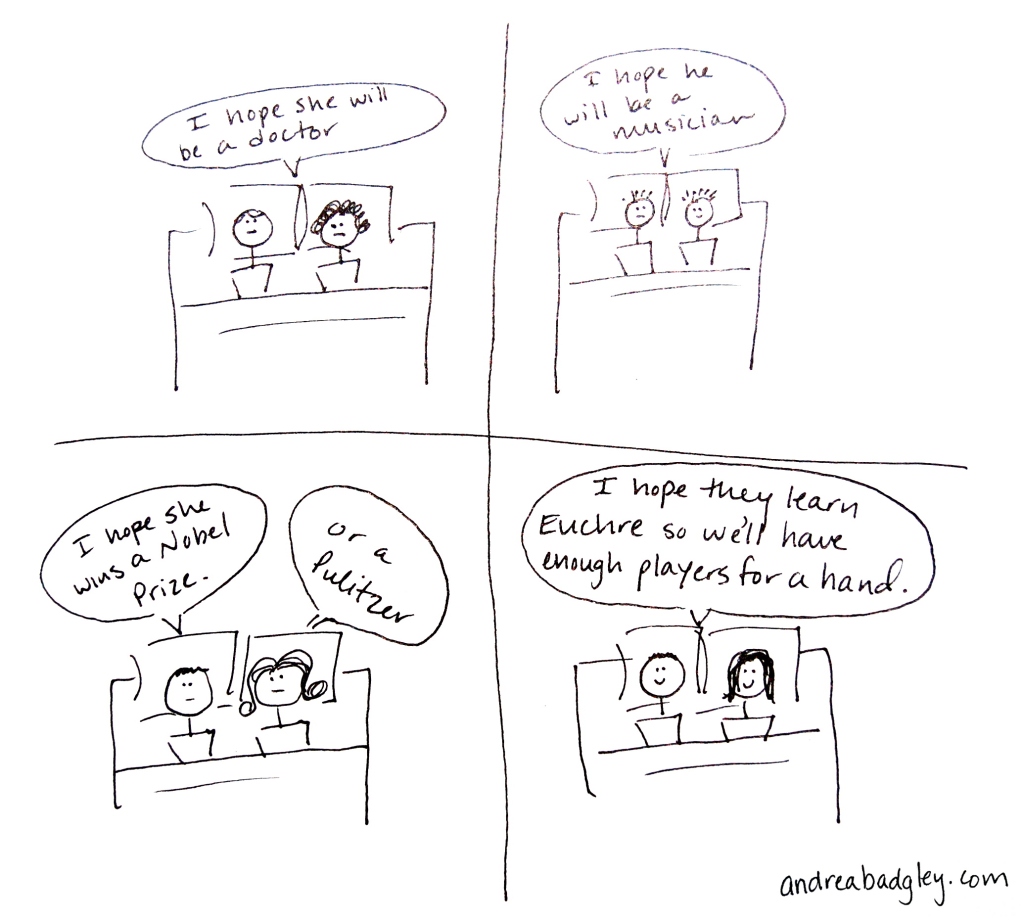 When our children were younger, I think my husband’s soul died a little bit every time he had to play Go Fish or Old Maid or War.  But the kids know how to hold their cards now.  I remember that was a huge first step, one that I took for granted until I saw their tiny starfish hands struggle with fanning the cards so they could see the suits and numbers.  There would always be a clump of four cards stuck together, then one sticking way up, a snaggletooth in an already jagged row.  Diamonds and spades would tumble to the floor when our son let go with one hand to pull out a heart to play.

Those days are over now, as are, my husband hopes, our days of Go Fish.  While I was away last weekend, he taught them Go Boom, where one person leads a card, and the other players have to follow the card that is led, either by suit or by number.  Kind of like UNO.  Whoever wins the trick gets to lead next, with the ultimate goal of being the first person to get rid of all your cards.  Go Boom taught the kids some of the language of Euchre – “lead,” “trick,” “suit” – and about card ranks, leading, following leads, and most importantly, the strategy of how to lead.

So this week, while our daughter was at a playdate, I taught our son a no-trump version of Whist.  After one hand of basic leading and following, where an 8 of clubs beats a 2 of clubs, he said, “There’s not much to this, is there?”  I smiled and stepped it up to Knock-Out Whist, a kid’s Whist that introduces trump cards.  I told him, “Okay, if I lead with the Ace of diamonds, you have to play a diamond.  If you don’t have a diamond, you can play trump and take my ace.  Even if your trump is as low as a 2, you beat my ace and win the trick.  That’s what trump means – it beats anything but a higher trump.  You got it?”

“Just throw away your crappiest card,” I said.

He played beautifully, like his father.  And he beat me.  Twice.

He looked up at me. “Can you bet money in Euchre?”

Later that night, we taught Knock-Out Whist to his sister.  In addition to teaching trump, I figured it was time to throw in dealing etiquette as well.  “Do NOT count the cards when someone else is dealing.  It’s really annoying.  Also, deal first to the person on your left.” I laser-eyed our daughter. “Not to yourself.”

When we were unclear on one of the rules, my husband pulled out his 700 page Hoyle’s guide to “popular games of skill and chance” to sort it out. He lay on his side on the couch, flipping through til he found the section on card games.

“Ha!” He crooked his mouth into a side smile.  “No wonder I like Euchre.  All these other game descriptions are half a page long.  But Euchre -” He licked his finger and started thumbing pages.  “Euchre is 1, 2, 3, 4, 5, 6.  Six pages of instructions.”  He smiled a full smile, his eyes gleaming like our golden-aged son’s, and dove into the rules of Whist.

This is the book we’ve used to find age-appropriate card games to play with our kids. You can play dozens of games with a simple pack of cards, so if your family (i.e. you or your partner) is sick of all the same old board games, I recommend this as a jumping-off point.  The rules aren’t super clear for some of the games (which is why we had to dig further into Hoyle for Whist rules), but it’s a great place for ideas.

8 thoughts on “Training em up for Euchre”