Sticks and stones may break your bones, and words may too, it turns out.  At least as far as your mind is concerned.  I won’t write a grisly description of a bone breaking – I did enough of that with tooth drilling yesterday – but according to cognitive research explored on NPR yesterday, if you read vivid language describing the action of say, a femur splintering, your mind doesn’t just see the words and paint a visual picture, your brain simulates the experience.  If the writing is good, you might hear the femur crack, see a shard slice through skin, sense a shiver in your own femur.  Feel your stomach turn.

This research has powerful implications for writers.  It gives us insight into how descriptive writing works, and why it is effective.

Until the 1990s, linguists believed that language was processed by a discrete region of the brain, a language “module” that humans evolved uniquely, since no other species shows an aptitude for language like mankind does.  But in the 1990s, scientists who wanted to find this module in the brain found something else entirely when they used functional MRIs to observe the brain’s response to words.  They found that when a human hears language, a discrete region of the brain does not respond.  The entire brain responds.  As Benjamin Bergen and Jon Hamilton described in the NPR piece,

If someone read a sentence like, “the shortstop threw the ball to first base,” parts of the brain dedicated to vision and movement would light up.

Your vision system and your motor system react to language.   In other words, as Bergen explains, “When you encounter words describing a particular action, your brain simulates the experience.”

This is the key element that got me excited as a writer and a reader – that language creates a virtual reality.  They didn’t go into it on the show, but presumably when your mind interprets words, it doesn’t just form images and motor reactions, but good writing may also trigger physiological responses, such as the release of adrenaline or endorphins.  Like when Shirley Jackson terrifies me, makes my heart race, and triggers the fight (keep reading) or flight (hide the book behind others on the shelf) response with The Haunting of Hill House.  Or when Natalie Goldberg does the opposite – relaxes my muscles, lowers my blood pressure, and cloaks me in calm – with her gentle language in Long Quiet Highway.

So what does this mean for creative writers?  These findings are the essence of the author’s adage, “Show don’t tell.”  They explain why showing works and telling doesn’t.  When we tell a story in the form of “this happened, and then this happened,” we’re not giving the reader much to work with.

Alice went to the window and got mad when she saw Tom had showed up.

What experience can the brain simulate from that?   Not much.  “Went” and “got mad” don’t trigger specific images that give the mind traction for launching a virtual reality. But if we use strong verbs, if we show Alice’s stride, if we describe her anger with a facial expression:

Alice strode to the window and scowled when the chauffeur opened the car door and Tom stepped out.

The reader’s brain has specific images to work with, like “strode” and “scowled,” that conjure not just visual cues, but emotional cues as well.  The reader will likely experience a more vivid simulation with the second sentence.  Maybe there will even be a  reaction – a little fluttering in her heart as her mind braces for a confrontation.

From a big picture standpoint, these findings are thrilling to me because they show why literature moves us, why we crave it, why we are driven to create and consume it.  Language is not just for communicating, as bees communicate the location of flowers through the waggle dance.  Human language is also for evoking feeling, for connecting us through common crises, for teaching us how others have lived.  For suggesting significance beneath the surface of it all.

As the NPR piece explored, the brain can make sense of something that doesn’t exist – a flying pig, in their example – by extrapolating and inferring meaning through language cues.  With literature, and creative writing, we are able to simulate experiences the reader has never had, or trigger ones that she has.  If we write well, we are able to create a virtual reality that links a 21st century executive with the struggles of a 19th century slave, or a modern 7 year old with a pioneer prairie girl, or a gregarious extrovert with the inner workings of an introvert.

If we use language well, we make it possible to understand each other.  We transmit an awareness.  If the reader’s mind feels that femur splintering, she will have compassion. 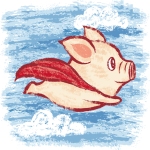 Imagine A Flying Pig: How Words Take Shape in the Brain by Jon Hamilton, May 2, 2013 On National Public Radio’s Morning Edition

9 thoughts on “Why creative writing matters: new findings on the brain’s reaction to language”