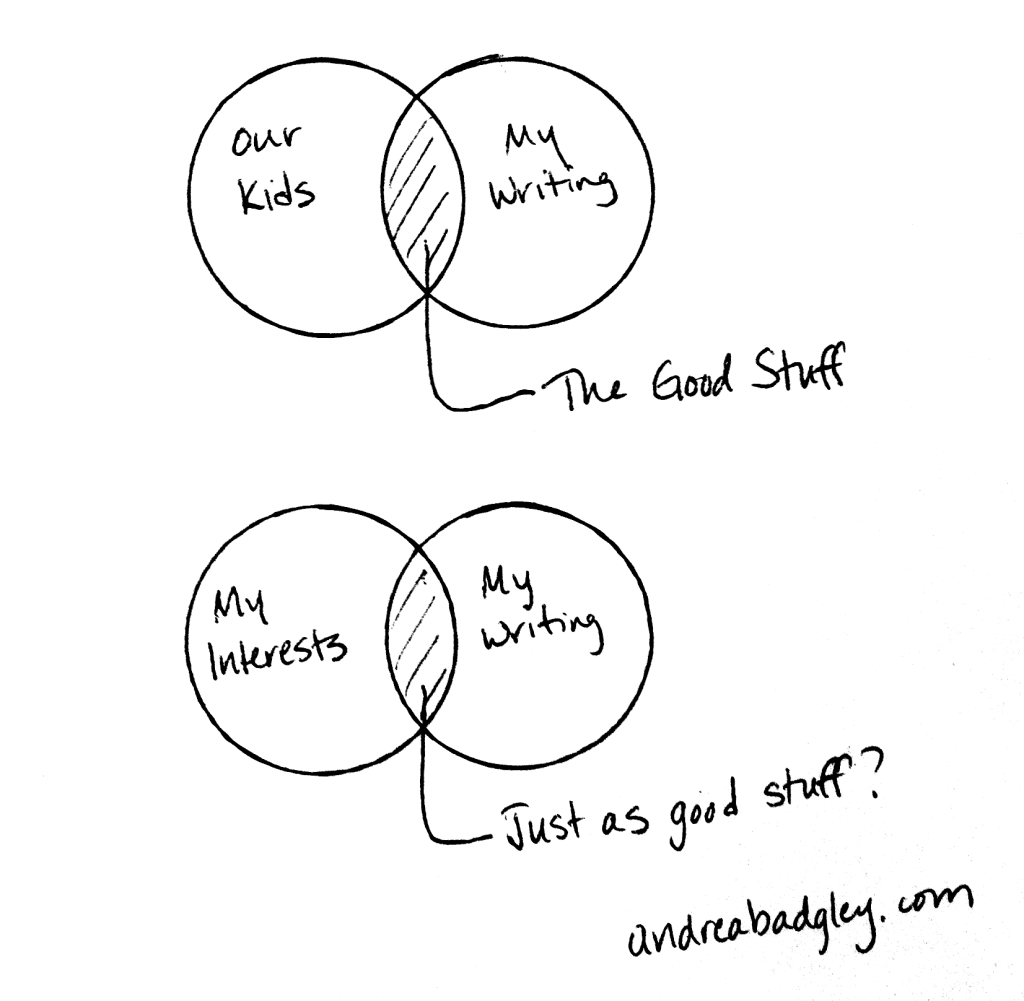 “Hey buddy, remember when you said it would be cool if I became an author?” I glanced at our nine year old son in the rear view mirror.

“What do you think I should write about?” I wondered if he held fiction at the top of the writerly hierarchy and only thought of authors as writers of novels.

He didn’t even think before answering, “What you like.” As in the things that interest me, the stuff I like, the people in the world who make me happy.

I leaned up and grinned into the rear view mirror, “So I can write about you?”

“No!” He grinned as he shook his head, but he was serious. Our son, like my husband, is very private. “Definitely not,” he said. He doesn’t want his business splashed all over the internet.

“What about you, baby girl, can I write about you?” I smiled at our seven year old in the mirror.

Our daughter laughed and shook her head, “No! Don’t write about me!”

I laughed with them, as they suggested things I could write about (a fruit army vs. a vegetable army, the adventures of a talking doughnut), then I stopped. Now that they’d said it out loud, now that we’d had this conversation, it was official: I cannot write about our children without their permission.

I heard a program on National Public Radio a couple of years ago about children and social media – “Keeping Your Kids Safe Online,” a Fresh Air interview with James Steyer, author of Talking Back to Facebook: A Common Sense Guide To Raising Kids in the Digital Age. The show presented a fascinating, and frankly scary, look at how much time and energy young teens spend on perfecting profile pictures and curating an online persona (what Steyer called presentation anxiety), or firing off text and Facebook conversations that are nothing like the types of conversations they’d have face to face with another person (how might these digital conversations affect their social skills?). But as the show moved into the territory of how teens tend to self-reveal before they self-reflect, and that there is no “erase” button if you’ve posted something you later regret, Steyer mentioned a phrase I had never heard before: the right to be forgotten.

This right to be forgotten was apparently a pretty big deal back in 2010 over in Europe, and it basically means that when it comes to the internet, there is no such thing as ephemera. Once an image has been posted, or a Tweet, or Facebook update, or even a blog piece, it has the potential to never go away. It will not disintegrate in a rainstorm, or be fogged by the vagueness of memory. Even if the author removes it, someone else could have downloaded it or taken a screenshot before it was removed. An erase button is not truly an erase button. Social media has the potential for giving your child a digital footprint, either of his or her own doing, or for the parents of younger children, without his or her consent or participation, from the very first picture or blog entry Mom or Dad posts on the internet. Not only that, but this identifying information has the potential to be seen by a much larger viewership – the whole world, in fact – than if you sat on the couch and showed Grandma a photo album, or told your girlfriend the story of your son’s first pimple at a dinner party.

When I heard the Fresh Air interview, I had probably posted the latest pictures of our kids to my Facebook page just that morning. Though my page is private, I wondered if that was fair to them, to put their faces up for all these people, many of whom I haven’t seen in 20 years and don’t really know that well, to see. When I started my (very public) blog not long after the show, and then drove our kids cross country on a road trip fraught with disasters to our new home, I vowed to myself that even though the events of our trip would make dramatic and sometimes funny stories, I would not write about them out of respect for our children. Even though I made a huge list in my journal of everything that happened, including notes like “This trip has been ridiculous,” at the end I wrote this:

When you are an aspiring writer, you read over and over again, “Write what you know.” I know this trip. I know our kids. There is so much material here. And therein lies my dilemma. After hearing the common sense media interview about the right to be forgotten, I don’t want to write about the kids. [Our son] is private, and [our daughter] needs to make her own way. So I will have to find my material elsewhere.

If you’ve read my blog over time, you’ll see that I have, in fact written about our kids. I purposely don’t use their names, and I won’t post pictures of them either, but still, they are funny, and entertaining, and are gold mines for shiny nuggets of blogging brilliance, and so I broke my vow, and I have written about them.

But now that we’ve had this conversation – “Write about stuff you like, Mom, but don’t write about me” – and they have made it clear that they want their privacy, I will respect their wishes and will no longer publish anything about them that they have not approved.

And this kind of worries me.

“…What do I write about as a stay-at-home-mom who won’t write about her husband and kids?”

When I read my piece back to the workshop, the instructor’s mouth dropped open. She shook her head and I think she may have wagged a finger at me. “Oh no no no. Change of plans. Andrea, you do a 10-minute free write about yourself without husband or children. Your prompt: ‘I’m not married and I don’t have kids.'”

I glared at her. “I don’t like this plan, Lesley.”