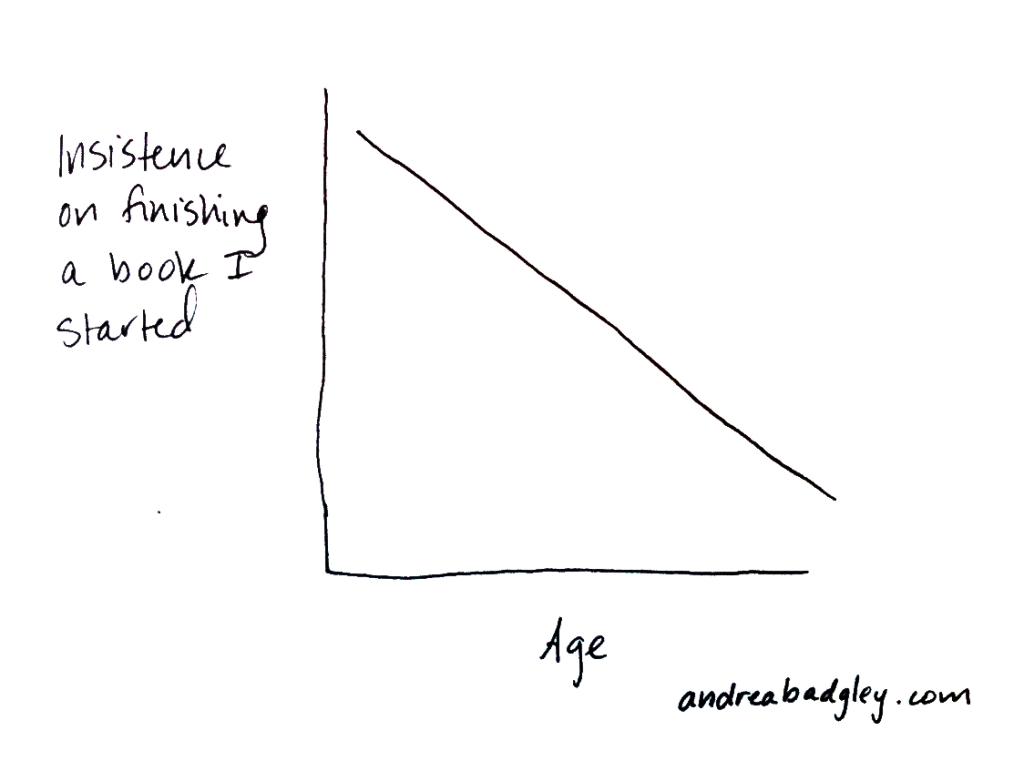 I officially quit on a book last night. Shelved it under DNF (did not finish) on Goodreads, removed it from the homepage of my Nook, and resumed the recurrent task of trying to find something gripping to read.

When I was younger, I refused to quit on a book. Even if it bored me to tears, or I hated the characters, or it took me places in the human psyche that I really didn’t want to go, I’d rally, and rally, and rally until I turned the last page. Some books were worth it. Like A Prayer for Owen Meany. John Irving drags the beginning of that book out forever, not just setting a stage, but shopping for lumber, forging steel for scaffolding, and then bolting the infrastructure of it together before finally showing you what its going to look like.

Likewise, he develops his characters slowly (and consequently, deeply), and all the while you wonder, I like Owen and all, but where is this going? I wanted to quit on Owen Meany a hundred times in the first 100 pages. But since so many of my peers, my reading peers whose shelves I respected, claimed Owen Meany as a top five favorite, I persisted. I rallied. And I persevered.

Now, our son is named for Owen Meany (in my mind, at least).

My first DNF was Les Miserables. It was terrible to give it up, a monumental struggle. Especially because it was a gift from my uncle, whose patronage has provided some of my most treasured titles – Life of Pi, The Shipping News, Long Quiet Highway. His own copy of To Kill a Mockingbird when I graduated from college. The books Uncle Syd has given me have changed my life, made me believe in God, humbled me before excellence, permitted me to write, deepened my empathy. I re-read them, over and over again.

So when I decided to close Les Miserables and not open it back up, it was with enormous anxiety. What am I going to miss by not finishing this? Uncle Syd gives masterpieces – deep, life-changing books – and I’m abandoning this one.

I abandoned Les Miserables more than ten years ago. Now, with two kids and my life approaching its (estimated) midpoint, time is even more sacred to me than it was then. I don’t feel guilt anymore, or anxiety, or what might I be missing? when I walk out on a book. I know a better one will come along. One that will grip me, and change me, and leave me hung over when I’m done. One that I will buy for our own shelves after borrowing it from the library’s, so that I can re-read it, over and over and over again.

The book I abandoned was The Book Thief by Markus Zusak. Because of all of its five star reviews, I gave it about 150 pages. It still hadn’t hooked me and I found myself browsing the library for something new to read. Never a good sign mid-book.

19 thoughts on “I abandoned a book last night”