Boating life revolves around weather, and here on the coast of Georgia, it also revolves around tides. We spent all day yesterday waiting for 2pm to come so we could catch the sandbar — our ultimate destination for the day — at a time where the tide was high enough to get the boat out of the creek, but low enough that there would still be a sandbar left. At high tide, which was around 4pm yesterday, there wouldn’t be much island to land on.

To kill time we wandered around Tybee for goggles, lemons, and sugar. Vacation necessities. My mom and daughter also passed the morning making a caramel cake: a three layer cake with a frosting that requires two caramel pots — one with cream and one without — that must arrive at the correct temperature and color simultaneously, and then must be beaten together at exactly the right time and then rapidly spread on all three layers of the cake before it gets too thick to work it anymore. The frosting was complex and required two (and sometimes three) people to do everything as quickly as the process demanded. It also took two attempts (one pot of caramel burned) but boy was it worth it. The final result taste likes pralines.

Throughout the morning, the weather darkened. Rain, rain, more rain. For several hours we watched the radar. We watched the sky. We ate lunch while it poured. We talked about a Plan B. I rooted around in my parents’ game closet and found a Young Players expansion pack of cards for Trivial Pursuit. The kids had never played Trivial Pursuit, and I got a bee in my bonnet to play that, but then I couldn’t find the original Trivial Pursuit box with the board and the pie pieces. We killed another hour searching the entire house for the missing board, which led to Mom cleaning out the guest room closet where we did find Boggle and Scrabble, but by that point the kids and I really really wanted Trivial Pursuit.

We were about to get in the car to make the trek over to Savannah to buy the board when my dad said he saw blue sky and the radar was clear. Five minutes later, we were in our swimsuits, slathering sunscreen on ourselves at the end of the dock, ready to go.

On the way out of the creek, we saw a neighbor’s dock, destroyed by last year’s Hurricane Matthew. About halfway from land to the river, the dock falls away into the marsh like an exploded train bridge in a movie. The owners can’t get out to their floating dock, which has a second layer of collapsed walkways: the ramp from the raised deck at the end of the dock to the floating platform on the river is now dangling in the water. The floating dock and the grounded dock are no longer connected.

We saw another hurricane casualty on our approach to the sandbar. A 25-30 foot black-hulled sailboat lay on its side, about 100 yards into the marsh, behind a hammock of land, its mast at a 30° angle to the ground. There’s no way to get to the boat. There’s no waterway and no path over dry land. It is stranded, lifted by the high water of a hurricane and deposited in a place a boat cannot get to.

When we arrived at the sandbar, the sky was still gray. We were the only boat on the water, and we had the sandbar to ourselves. Our daughter jumped off the bow with the anchor, and as soon as she stuffed it into the sand, she and our son were off running as fast as they could, free on an empty beach.

We went to the sandbar a couple of years ago, and the excitement that summer was the cannonball jellies washed up on the sand. This year it was horseshoe crabs.

“Mom! I saved a horseshoe crab!” Our daughter ran across the beach to fetch me so I could see. “I flipped it over — it was on its back — and now it can get back to water.”

We watched as it made its slow, prehistoric trek across the sand. Then the kids were off again, splashing first through ankle-deep shallows that quickly deepened as the tide came in, then swimming in the steeper drop-off over by the boat on the river side of the sandbar, then finally moving to their favorite spot: the ocean side, where the waves are. I watched ships come and go at the mouth of the Savannah River. The tide was right for them, too, to enter and exit the port.

On the eastern edge of the bar, the part facing no island, only the open ocean, was a spit of land drenched in shore birds: pelicans on the oceanfront reach, their feet in the water; sand pipers in the splash zone facing north, towards Tybee and the shipping channel, chasing receding waves to dip their bills in the wet sand and catch coquinas, being chased by incoming waves back up onto the shore; seagulls on the dry land of the isthmus, all facing south, towards uninhabited Little Tybee; terns flying, black skimmers mingling with seagulls, willets hanging around the sand pipers. 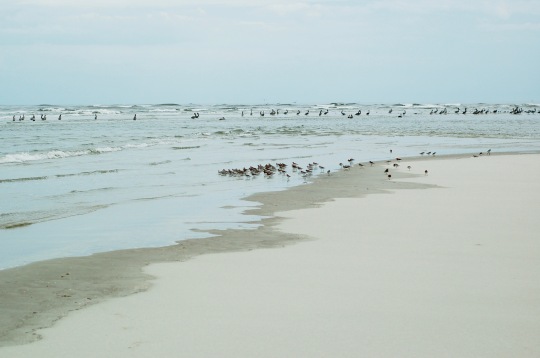 Water is getting higher

During the couple of hours we were on the sandbar, I watched the dry spit gradually become submerged by the incoming tide. Where the birds were spread over a large amount of land when we first arrived, the gradually clumped closer together as the land beneath their feet disappeared.

We left at high tide. There was still plenty of sandbar left, but my parent’s dog had worn herself out, and it was time to get her back home. We left the sandbar as empty as we found it, and we headed home for a dinner of blackened fish, dessert of caramel cake, and after-dinner entertainment of board games thanks to a post-boat-trip quest in Savannah for Trivial Pursuit.

4 thoughts on “The Sandbar”