“Oh my God, a lady’s slipper!”  I pulled the camera out of my pack as I raced to the side of the road.  I crouched down and snapped pictures as our nine year old son giggled.

I looked up and saw two more lady’s slippers, and then another one across the street.  I zigzagged back and forth and shot 20 frames in the first five minutes of our hike.  We hadn’t even made it to the trailhead yet. 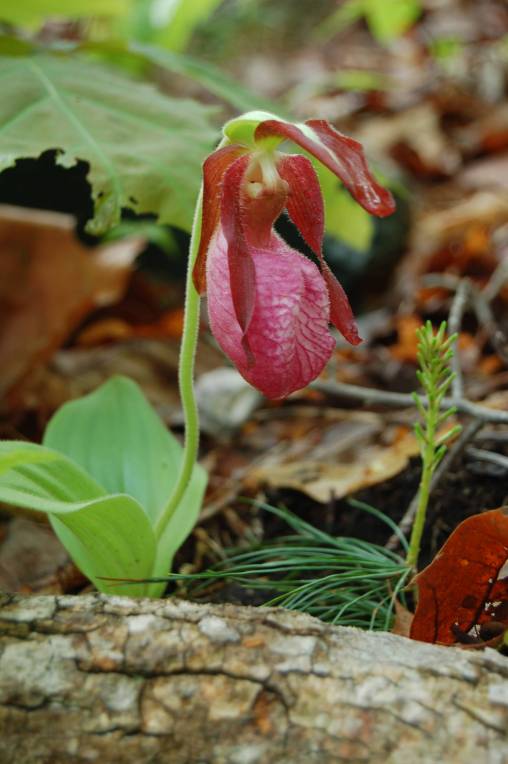 The forest at the bottom of Old Rag Mountain was lush with the apple green of spring.  Every shrub, every tree, had leafed out, and in their newness, no matter the species – oak, birch, maple – the leaves were identical shades of peridot.  It was mid May, and we had hit Shenandoah at the peak of spring’s grandeur.  Everywhere we looked, the forest floor was sprinkled with wildflowers.

My husband paused on the trail as I shot a close up.  He looked out into the sea of green, then at me, photographing yet another tiny detail – a flower, a stone, a mound of moss.  “Can you get a picture of the whole forest?”

We continued up, and up, and up, stepping over millipedes, pressing our palms to boulders, burying our faces in mountain azaleas to inhale their honeysuckle scent.

“Dad, can we climb this rock?”  We had been on the trail for an hour, but we still had a long way to go.  The hike was going to be about six miles round trip, which would be the longest distance our kids had ever done.  More than that, the final ascent was going to be extremely technical, with lots of bouldering.  My husband looked worried.  He checked the sky for the thunderclouds that were expected to roll in.  The exposed rock scramble at the top would be a treacherous place in a storm.

“I think we should keep moving,” he said.  “You guys need to save your energy.  This is going to be the hardest hike you’ve ever done.”  He checked the sky again.  “There are going to be plenty of rocks to climb at the top.”

We had gotten an early start – we woke with the sun and were out of our tent by 6:30 am, boiling water for oatmeal and coffee.  At 8 o’clock we were already on Skyline Drive, on our way to the trailhead.  So other than the threat of storms, I wasn’t too concerned about time.  I hiked at the back and stopped frequently to snap pictures.  The diversity on the trail was irresistible, and I wanted to photograph it all.

“Andrea, is it okay if we don’t wait each time you stop?  I don’t want to ruin everyone’s fun, but I really think we should get to the top, and then we can take our time on the descent.”

I shot one more closeup then put my camera away, “No, you’re right.  I can take pictures on the way down.”  I vowed to keep my camera stowed, and started hiking at the front, a little ahead of the family so that if I wanted to stop for a photograph, they could catch up while I shot.  Not ten minutes later, I had my camera out again.

“Look at these flowers!  They look like bells!”  My son, then husband, then daughter hiked by.  I passed them a few minutes later when they stopped for water, hiked ahead, then had my camera out again.  “Look at all this trillium!  There’s a whole hillside of it!”

My son laughed as he passed me.  “You’re not doing a very good job of keeping your camera put away, Mom.” 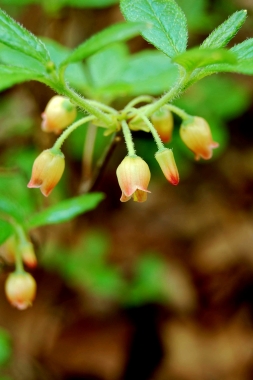 When we arrived at (what I now realize is) the famous rock scramble, I was glad for my husband’s prodding.  I was blissfully ignorant about the hike – I hadn’t looked at the map or read anything about it – and as we lowered our kids into crevasses and watched them clamber over stones that curved toward a 3000 foot drop, I realized it was probably a good thing that I hadn’t.  I would have seen things like this, from the National Park Service website:

Our seven year old daughter was a natural on the rocks.  She found her own hand and foot holds, and her tiredness (read: boredom) from the three mile (so far) hike vanished as she scrambled over gray granite.  Our son accepted our help more often, and said it was “a little freaky” as he squeezed between 8 inch cracks in mountain stone, or jumped from one car sized boulder to another.  The further we climbed on the stone, the more nervous I got about our descent.  Getting up the rocks was hard enough – getting down them could be perilous.  My husband and son were concerned about the descent too.  Yet we continued to climb. 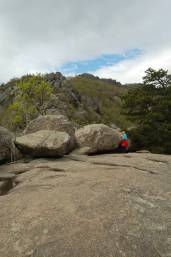 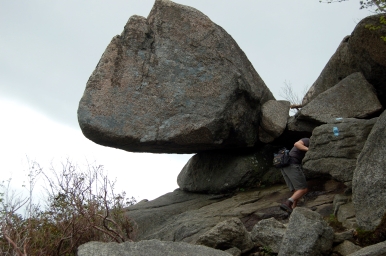 Despite our height (and my nerves), the rock scramble was a grounding experience.  I was connected to the earth up there, dependent on it, with my bare hands on rough granite, my hip against a boulder, my heart pressed to stone.  When we finally reached the peak, after several false summits, I was exhilarated by the mountain under my feet and the big sky above, by boulders perched at the top of the world, by gentle rain falling from a blue sky.  There were no thunderclouds in sight, and we had made it to the top.  I surveyed a 360 degree view of the vibrant green of Appalachia in sunlight, an unmarred view of spring’s progression up the mountain sides – a profusion of apple green in the valleys thinning to brown bare branches at 3000 feet.  And there wasn’t a building in sight.  Just forest and rocks and mountains.

We high-fived the kids, and hugged them, and told them, “You are the coolest kids EVER.  Look what you just did!”  My husband told them, “You can have as many s’mores as you want tonight.  You can eat them til you puke if you want to.”  Our son shouted “YEAH!” and jumped from one boulder to another at the top of the mountain,  while my heart jumped into my throat. 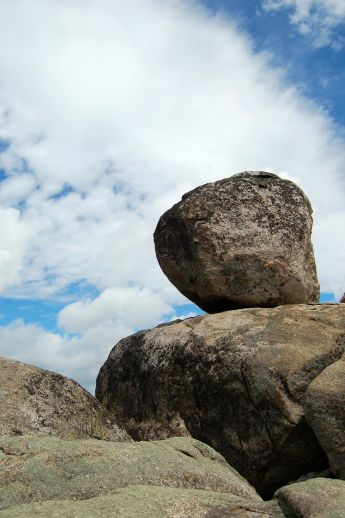 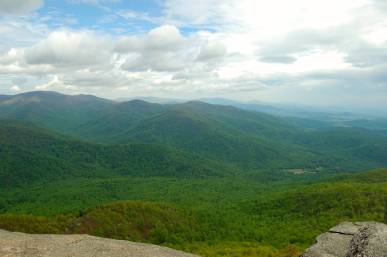 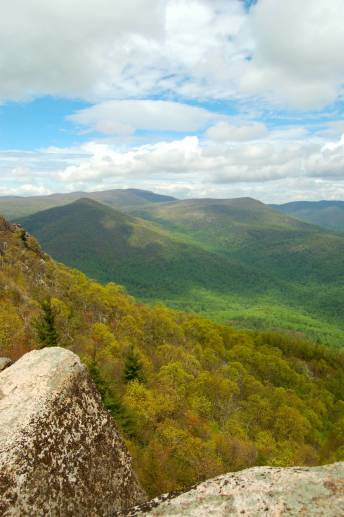 Their dad and I discussed our options while the kids ate granola bars and the wind whipped our windbreakers against our skin.

“Is there another way off the mountain?” I asked.  “That scramble is going to be really tricky on the way back down.”  Our son had been pretty freaked out on the descent off of only one rock at Dragon’s Tooth in Blacksburg.  There were scores of boulders to navigate here.  And to be fair, I wasn’t excited about descending the scramble either.

“There’s another way down, but it’s five miles,” he said.  Crap.  That would add up to nine miles.  Double the distance the kids are accustomed to doing.

And so we did.

Near the bottom, our daughter took my hand and said, “We saw a lot on this hike today.” 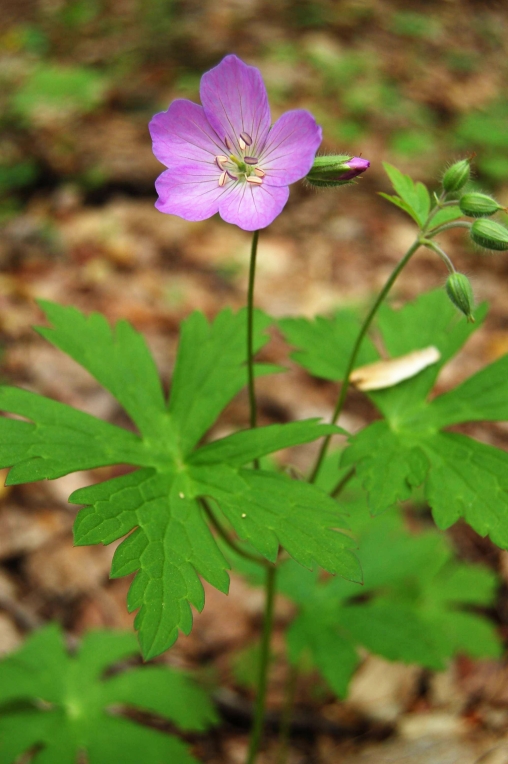 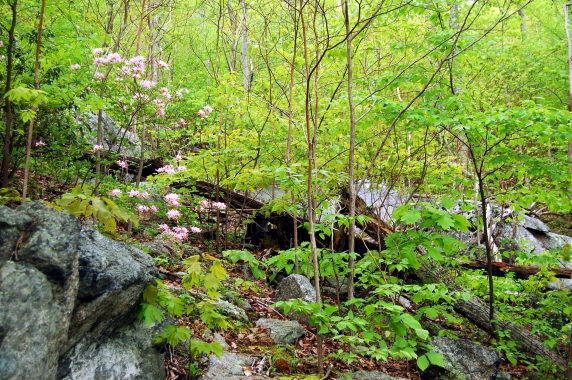 “Yeah, we saw lady’s slippers, and mountain azaleas, a hillside of trillium, and those wild geraniums you like,” I said.  She had one of those tucked into her pig tail.

“And dandelions,” she said.  “And a waterfall.”

“And those cute little white flowers, and the violets, and boulders perched on mountain tops, and spring climbing the forest.  It’s amazing how pretty it can be when we don’t build all over everything.  When we just allow nature to be nature.”

Our son nodded, a happy smile on his face.  “I like it when nature is allowed to be nature.”  And after nine miles that were supposed to be five, after climbing to an elevation of 3291 feet under his own power, after five hours of hiking, he ran off down the trail.

12 thoughts on “When nature is allowed to be nature”