The grown-ups stood at the front window sipping spiked coffee and doctored hot cocoa. Our entertainment that day was watching Ed, the mail man, bend into the blizzard as he trudged through thigh deep snow to get to our across-the-street neighbor’s wall-mounted mailbox. All the kids entertained themselves by – well, I don’t remember how they occupied themselves. All that mattered was that they were entertained.

That was three years ago. Today, as the sky spits wet ice that coats cars and roads in slick sheets of slippery sleet, our son plays his Wii U instead of kicking the soccer ball with boys he invited over for his birthday. Once again, winter weather has thwarted his birthday plans.

Three years ago, when we lived in Minnesota, when our kids were still young enough to combine their birthday parties (their birthdays are two weeks apart in the middle of holiday season. Fun.), we planned a Saturday party at the bowling alley. It was December 11, 2010, a celebration of our son’s seventh birthday and our daughter’s fifth. In Minnesota, things don’t get cancelled for snow. In three winters, our children did not get a single snow day from school, despite several blizzards and a foot-thick perma-layer of white.

Finally, with only two hours til the party’s start time, when our street wasn’t plowed and we knew our soon-to-be salt-crusted Passat wagon wouldn’t be able to push through the accumulation, I looked at the cookie cake I had already baked, the snacks I had already packed in totes, and I picked up the phone.

“Hey Stace. I don’t think we can get to the bowling alley. We’re going to have to cancel the party.”

“Oh no! The kids will be so disappointed.” She had three of her own, all with Swiss and Germanic names peppered with Ks and Vs and Zs, who had been excited about the party all week. Now they would be cooped up in her house, full of pre-party excitement that would not get bowled out.

“Well, I was thinking, if you and Ben want to still get out of the house, we do have this cookie cake.” Her family lived around the corner, a block or two away. “Y’all want to come over here?”

We extended the same invitation to other guests, most of whom also lived nearby. Two hours later, at the bowling party’s start time, my husband and I looked out our front window into the blowing snow and saw two parka-clad grown-ups bent into the gale, each pulling a sled laden with brightly colored puff-balls of children. The snow was deep – almost to Ben and Stacy’s knees – and they pushed through it like my brother and I pushed through marsh mud as children. The sleds sank under the weight of a seven-year old, a five-year old, and a toddler, and Ben and Stacy made their way towards our house lumbering step after lumbering step.

The storm picked up as they brushed off snow and stomped their boots in the mudroom. We could no longer see the street corner they had rounded. Our friends’ noses and eyes burned red. Snowflakes melted in their eyelashes, and I immediately offered them coffee and hot cocoa.

The kids disappeared into the living room, and the grown-ups stood at the back window. We blew steam from mugs and watched snow squall. A figure materialized from the whiteout – our neighbor, Matthew, with his four-year old daughter on his shoulders. A wake of snow pushed in front of his knees like water before a ship’s bow.

“Matthew, come in! Come in! We need to run a rope between our houses like Pa Ingalls ran between the cabin and the barn.”

I put a cup of coffee in his hands and offered a shot of whiskey in it. His blonde eyebrows shot up and he smiled a Nordic smile.

Once the third family emerged from the other blowing corner of the back yard and made it safely to our door – our Lutheran neighbor who sang in a gospel choir – the children disappeared into kid rooms. The adults moved to the living room. Some of us stood at the front window and watched snow pile.

“Hard to tell with the drifts”

“Oh my God, is that Ed?” Our friends who had been lounging on the sofa jumped up and padded over to the window. We all shared Ed, the neighborhood mail carrier. We stared openmouthed as he bent into the blizzard. The flaps of his fur-lined USPS-issued hat were pulled over his ears and tied under his chin, and his blue postal parka with the reflective stripe was flecked with white.  He trudged through thigh deep snow to get to the wall-mounted mailbox on our neighbor’s front stoop.

We watched, entranced, as if we were watching a movie. “I better put another pot of coffee on.” I took my time – Ed wasn’t getting anywhere fast in that blowing mess, and he still had to tramp to two more houses before he’d get to ours.

When he slogged his way onto our stoop, I opened the door and told him, “Come inside Ed! This is crazy that you’re out delivering mail.” Even the Minnesotans thought it wild. He pulled his snow mittens off and stuffed them into the mail bag slung over his shoulder. I put a cup of black coffee in his hands. Threads of blood vessels reddened his nose and cheeks, and his eyes watered.

“I had to leave my truck over on Roselawn,” he said. “Couldn’t get it down the street.” He wrapped his chapped hands around the mug and gulped large sips while the coffee was hot.

“It’s really blowing,” he said, and finished off the cup before it had a chance to cool. He handed the mug to me and smiled, “Thank you very much for the coffee.” He pulled his mittens back on, and we all patted him on the back before sending him back out into the storm.

“Thanks Ed, be safe out there.” He bent his head and plowed through the knee high drifts in our front yard. When we dug out the next day, after the storm had blown through and the sky was a crystalline blue, we made sure to dig out the postman’s path.

“We need to give him a nice tip this Christmas,” my husband said.

I don’t think the kids cared that year that their bowling party was cancelled. I certainly didn’t. We ate cake and fed Ed and drank whiskied coffee in the early afternoon, and the kids played warm inside together while the world outside blew white and cold. We were all happy. 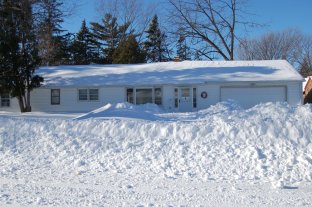 View of house from plowed street

Snow piled up to windows

Compost bin peaking out from snow

This year, our daughter was able to have her party (Saturday), but our son’s was supposed to be today. I don’t have a cake or snacks because he wanted it to be low-key. He doesn’t like to be the center of attention. He didn’t even want his friends to know it was a birthday celebration. He just wanted to play soccer, 3 on 3 with his five friends. Without cake, or parents carrying children through blowing snow, or drinking hot spiked drinks before five o’clock, or children tinkering in kid rooms, what will our memories of this cancelled party be?

I guess they will be whatever I make them here: my husband and son wrapping black railings in white lights while icy rain sleets down; our son exclaiming, “My snow globe!” and beaming as if he’d rediscovered a lost friend when I unwrapped the Christmas decorations; me lighting holiday candles in the middle of the day. Today’s memory will not be of Ed trudging through a blizzard to deliver our mail, but of our son, who cracks windows to listen to rain, who loves the delicacy of snow, who delights in bad weather because he likes to be cozy inside.

The memories of this thwarted soccer day will be of our son who is happy as a clam, snuggled in the poofy chair next to the Christmas tree, reading a Hardy Boys book and smiling in contentment for his favorite kind of day: the lazy ones.

7 thoughts on “The perils of winter birthdays”